How to Determine Performance Bottlenecks

The CopyStorm “Copying…” tab has real-time metrics which help identify a components that are limiting the speed of a database backup. The metrics, located in the lower right hand corner of a “Copying…” tab are described in this article.

There are two primary factors which limit the speed of a CopyStorm job:

Metrics highlighted in the following image provide data indicating which component is the bottleneck at your site: 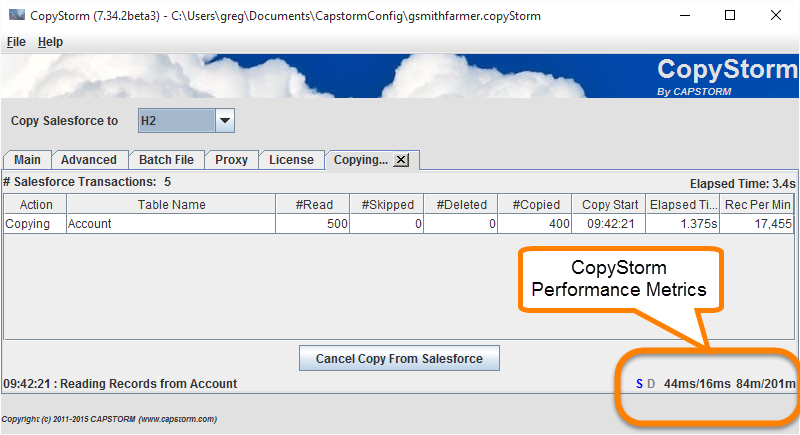 Metrics are divided into three sections:

In a balanced system:

In a system where the database is the bottleneck:

In a system where Salesforce is the bottleneck:

Problem #1: Proximity of CopyStorm and the Database

The most common issue we see is that CopyStorm and the database are not in the same data center. The underlying issue is that the protocols used to talk to relational databases require close proximity between the application and the database for great performance. Until we discover a way to increase the speed of light, CopyStorm running in India and talking to a database in Canada will give slow performance. You can solve this problem by running CopyStorm and its corresponding database in the same data center.

If the CopyStorm “S” threads are solid blue, the “D” threads are almost always grey, and the first data throughput number is large; then Salesforce is not delivering data rapidly. Even with a modest internet bandwidth of 20M/s, CopyStorm can easily transfer 20,000 – 30,000 accounts per minute. If you are sure that your available bandwidth is high then see your system administrators. There may be network software inspecting and slowing packets from Salesforce.

Though CopyStorm’s runtime requirements are modest, it cannot control demands made by other applications. Use a local system monitor to see which applications are using a high amount of CPU time. On a balanced system CopyStorm will always be consuming CPU — reading from Salesforce and writing to the target database.