While achieving CopyStorm performance can vary from company to company, the principles and practices in this article should help you optimize CopyStorm for your organization.

In most cases a company will want to optimize the rate at which records are backed up from Salesforce. In this case there are typically only a few parameters that typically yield performance improvements which:

The best way to improve the rate at which data arrives from Salesforce is to:

People often ask “Why not use the BULK API since it is the fastest approach?” The short answer is:

There are two common cases where memory usage is a problem:

Because the Salesforce SOAP API returns Attachments inline the memory requirements for large SOAP attachments will be almost four times the size of the attachment reported by Salesforce. There are two primary ways to solve this problem:

If you are forced to work on equipment that does not have much memory (e.g. an old 32-bit 2GB Windows box) then:

CopyStorm typically has very modest compute requirements — if you find yourself in a situation requiring more memory or compute than available Capstorm generally recommends upgrading hardware (a standard desktop has more than enough resources to run CopyStorm).

If your CopyStorm database is heavily used for business analytics, operational reporting, or other purposes while a CopyStorm backup is running you may experience database performance issues due to lock contentions. The easiest way to solve this problem is to reduce the number of records sent to the database in a single transaction: 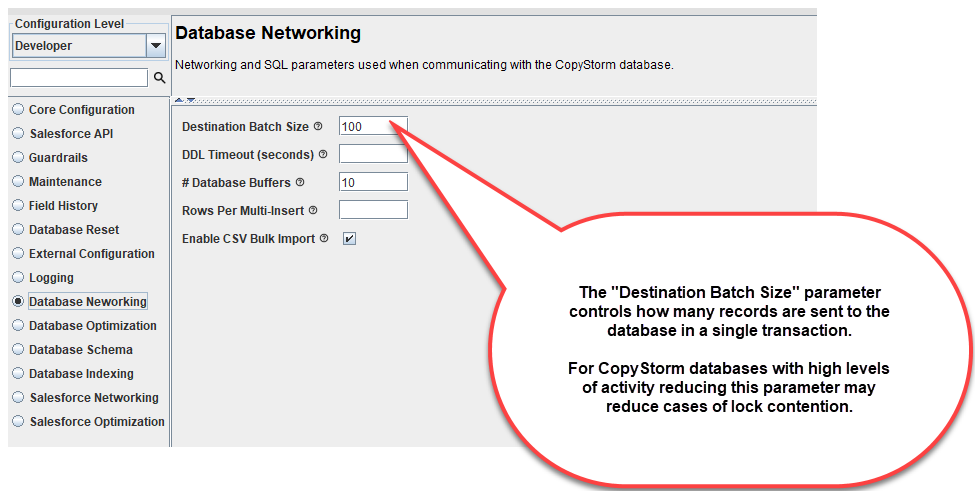